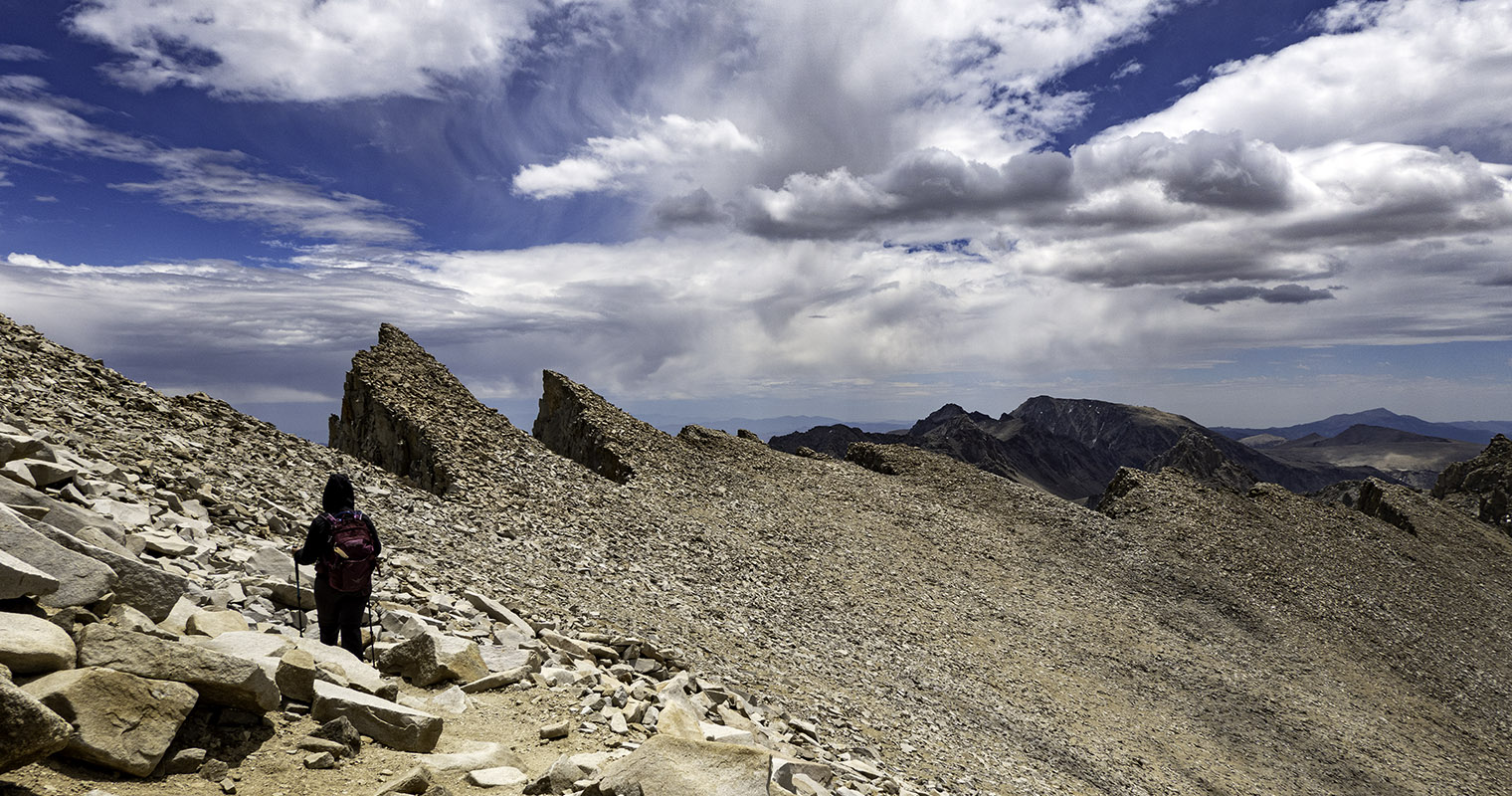 Mount Whitney is the tallest mountain in the continental US (not including Alaska) and is most commonly summited by a 22 mile hiking trail. We completed it as a day hike on July 3rd after several months of preparation.

A few months back, we were able to get a permit to hike Mount Whitney in a day on July 3rd. We planned the trip so we could get in some acclimatization before our hike to increase our chances of a successful summit.

On July 1st, we dropped off Heidi with a dog sitter and started our long weekend in the Eastern Sierras.

We snagged a day use reservation for Yosemite which would allow us to stop and hike on our way over Tioga Pass. We stopped near the eastern gate of the Yosemite to hike Mount Dana. The weather forecast showed a 50% chance of afternoon thunderstorms, so we knew there was a decent chance we would not be able to summit. It was worth starting the hike though just to get moving at elevation.

The hike starts around 9900 ft and the summit of Mount Dana is at 13,061 ft, making it the second tallest peak in Yosemite National Park. As we made our way up, we saw some of our alpine friends that we hadn’t seen in a while. Marmots and our first pikas of the year. We made it up to 11,000 ft and decided that the weather looked too threatening to continue. The rumble of thunder we heard didn’t help either. As we slowly made our way down, we ran across a lot more pikas, including one that let us hang out as it ate. Soon though, we saw lightning strike in the meadows and we decided to hurry on down. It also started to rain heavily and then to hail, so we were glad that we weren’t very far from our car.

After our short, but eventful outing at Mount Dana, we descended into the Eastern side of the Sierras and drove all the way down to Bishop, where we camped just north of town. On the way there, we encountered heavy rains and when visibility had turned very poor, we suddenly drove out of the rain. We were able to camp under a clear, but warm sky.

For our second day of acclimatization, we drove out to the Ancient Bristlecone Pine Forest, which is at about 9800 ft. We hiked the Bristlecone Cabin trail, taking the Methuselah trail back to the visitor center.

At that point, we figured it was time to head towards Lone Pine and Whitney. We were curious to see if we could get our camping reservations reinstated and we wanted to pick up our Whitney permit. Driving to Lone Pine, we saw a sign for wildlife viewing and we actually saw a herd of Tule Elk near the viewpoint!

When we arrived at the Eastern Sierra Visitor Center in Lone Pine, we asked about camping at Whitney Portal and found out that although they weren’t reinstating reservations, the Whitney Portal campground would be first come, first serve until July 5th. So we just got our Whitney permit and rushed up to the Portal to see if there were any campsites left. All weekend, we’d been braced for the holiday weekend crowds. Well, they weren’t at the campground. We arrived and there were tons of spots still available. We found a nice one for the following two nights, just as we’d hoped for!

Campsite secured, we went back down to Lone Pine for some supplies and ice cream. Then we headed back to our campsite to prepare for our summit attempt the next day and get to bed early. We prepared our packs and were in bed by 7pm with alarms set for midnight.

We woke up at 12am, ate breakfast, put on our boots, and drove the five minutes from the campsite to the trailhead. We weighed our packs and mine was at 15lbs, Dave’s at 17lbs. We started hiking around 12:45am, with just the stars and our headlamps to light the way. After hours of hiking in the dark, it was reinvigorating to see the beautiful glow of sunrise creeping over the horizon.

One of the highlights of the hike up was seeing some pikas on the 99 switchbacks, including this cute one eating the purple flowers that were some of the only plants at this elevation. We reached the junction with the John Muir trail and saw the sign for 1.9 miles to the summit. It was a rocky, very long 1.9 miles. But finally, the summit hut came into view. We had made it to the summit of Whitney!

But of course, the summit means we’re only halfway done with the hike. We stayed on the summit to enjoy some rest and some snacks. Then, we started on the long way down. The way down was hard on Alexa because she gets knee pain. So, it was a slow slog back to the trailhead. By the time we got down, it was about 7:30pm and we were glad our campsite was close by. Alexa had a quick dinner and immediately went to bed while Dave responsibly stretched and rehydrated before bed. Lying down and sleeping felt so good after the long day!

We slept in until 7am and felt a lot better than we had before going to bed. We went up the Whitney Portal parking area to do a bit of exploring. We went to see Lone Pine Creek waterfall, which is right next to the parking area. Dave hadn’t been to see it even though he’s been in the area to hike Whitney three other times! While we were enjoying the waterfall, we saw this dog come up and also enjoy the waterfall.

Next, we went to the Portal store to buy a souvenir sticker and some breakfast. We shared a breakfast plate of eggs, potatoes, and toast that really hit the spot after a big day of hiking! Dave had already planned on maybe doing some bouldering after Whitney and surprisingly, he was still feeling up for it. So, he did some bouldering at a few of the Whitney Portal area boulders before we decided to slowly head down and out.

On the way out on the Whitney Portal Road, we had to drive through the Alabama Hills to get back to Lone Pine. The Alabama Hills is a huge area of rounded rock formations that have been used in many movies over the years. Dave had always wanted to go see Mobius Arch, one of the more famous formations that you can actually photograph Mt Whitney through. We were driving by the area so we decided we might as well go try to find it. It was a 1.5 mile hiking loop to see the arch and it was in the low 90s since it was the desert in the middle of the day in July. So, we made sure to take a couple liters of water with us.

While it was an interesting hike and the arch was quite picturesque, this was also the first time during the trip that we actually felt a bit crowded. It still wasn’t very many people, but there were a few groups after us waiting to take pictures and it felt like more of a tourist scene than any other spot we’d been so far.

After our short time in the Alabama Hills, we started off back home, hoping to get a few hours of driving in and to find a cooler campsite for the night. Dave was also itching to do some more bouldering so we were looking for ideally for a bouldering area at a higher elevation where we could also camp nearby. Luckily, this is definitely possible in the Eastern Sierra. We drove up to Bachar Boulders, which is near the June Lake loop. Dave was able to get in a few hours of bouldering and we were able to camp a few minutes’ drive away from the boulders.

This was mostly a driving day to get back home to Heidi. Look how cute she was after we picked her up!