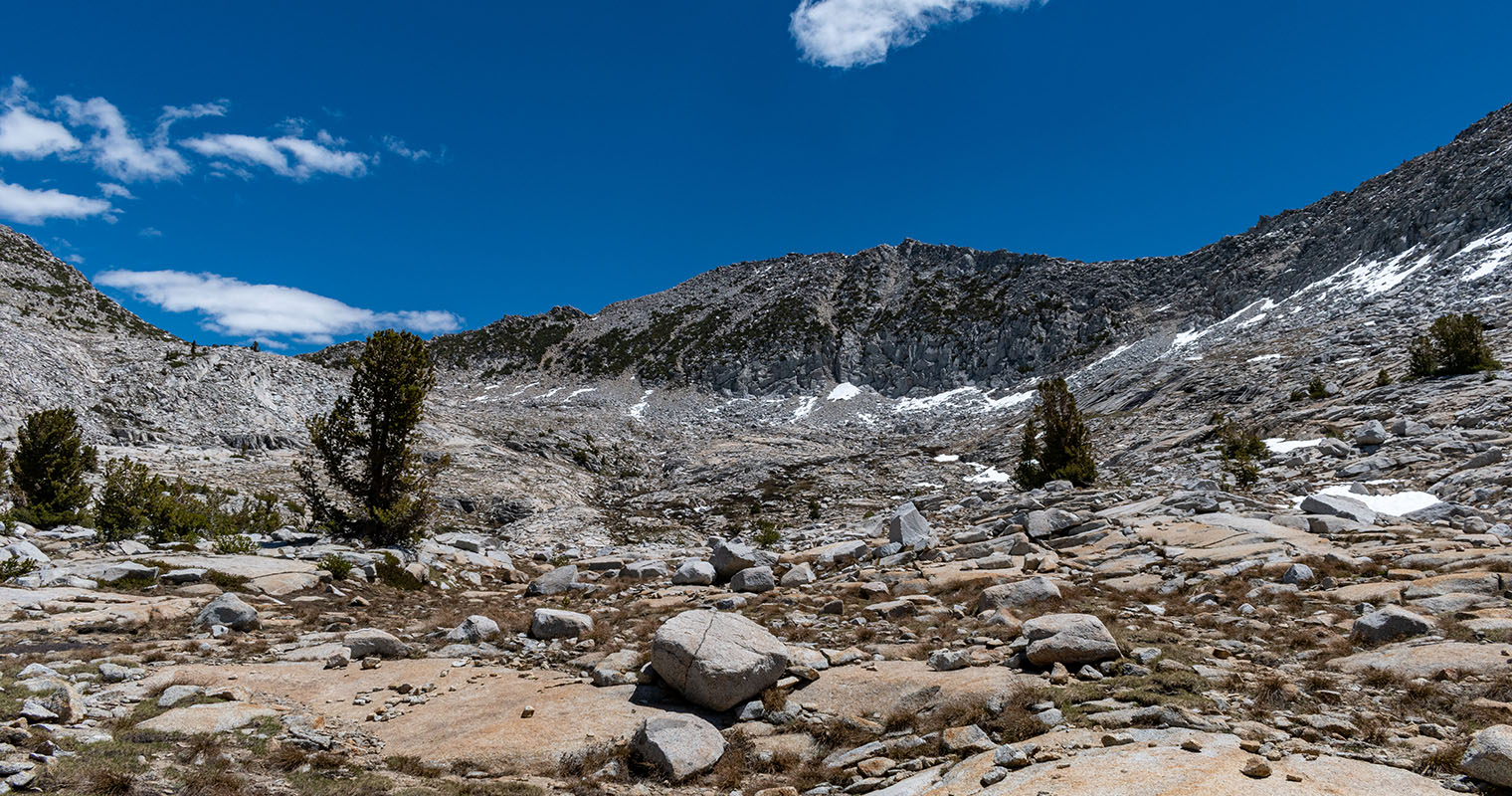 I didn’t encounter any other cars on the drive in and when I got to the trailhead, there was only one other car parked there. It felt strange to be in a popular national park with no other people or activity anywhere.

I started at 6:30am hiking up the reasonably graded and smooth switchbacks of the Copper River trail. As I ascended, views east into Kings Canyon quickly appeared. As I continued, the mountains in the high country popped into view.

After the initial switchbacks, the trail traversed the SW slope of Mount Hutchings for a while with a few switchbacks interspersed. There were several small creeks in this section that could be used for water, but I wouldn’t count on most of them later in summer.

After about 4 miles I reached the first camping area, Lower Tent Meadow. It was a forested area with a stream and a bear box. It might be a nice place to camp, but I would recommend pressing on and camping at Grouse Lake or Granite Basin for grander scenery if you’re backpacking.

The trail continued upward and the forest transitioned to open bush and grass covered slopes. The hillsides were beautiful and bright green. They would be miserable to bushwhack so thank goodness for the nice trail.

Finally just past 10,000 feet of elevation, I reached the split off towards Grouse Lake. An unmaintained trail left the main trail just beyond the last switchback before “The Lip” (the high point before descending to Granite Basin).

I carefully followed the faint trail north towards Grouse Lake, although losing the trail wouldn’t have been the end of the world. All I had to do at this point was follow the creek and I would end up at the lake. After about half a mile I reached a beautiful meadow. The trail pretty much disappeared at this point and never reappeared for more than short sections afterwards.

I crossed the creek at the north end of the meadow and continued towards Grouse Lake, never straying too far from the creek. After a couple hundred feet of elevation gain I finally made it to the lake. The lake was beautiful blue surrounded by alpine white granite slopes rising in a bowl around it. I hadn’t seen a single person the entire day, so I was really feeling the solitude at this point.

I rounded the lake on the east side, trying not to trample the alpine vegetation. Without a trail there was only so much I could do. Looking up from the lake I could see my goal, still looking very far away. Just a few thousand feet of elevation to go haha.

After rounding Grouse Lake I worked my way slowly up towards the peak. I mostly followed the creek, trying to keep myself on the easiest terrain. I headed for the left (NW) gullies of the mountain since they were fairly direct while still looking manageable. Initially, I started up the scree in one of the gullies, but abandoned this quickly since it involved the “two steps forward, one step back” kind of extra effort. I found hiking up the rocky areas made for easier progress, but I still had to chose my feet with care to keep them from sliding. Towards the top the talus got bigger and required me to use my hands a bit more (without being actual climbing).

From below, it’s hard to tell where the true summit of Goat Mountain lies. I thought it was towards the right (climbers right) side of the peak. Since I was approaching from the left side, I was very relieved to fine that the summit was actually closer to that side. The views from the top were amazing!

After a short break on the summit, I signed the register and started down. Predictably, the way down was much faster. The scree gullies that made progress on the way up difficult cushioned my knees a bit on the way down. The gullies were still pretty rocky though so not much scree surfing to be had.

After a long and tiring descent I got back to the car and drove a short distance to a pullout next to the river. I gave my feet a much needed ice-cold water soak and started the drive back home. It was a long and tiring, but rewarding day.