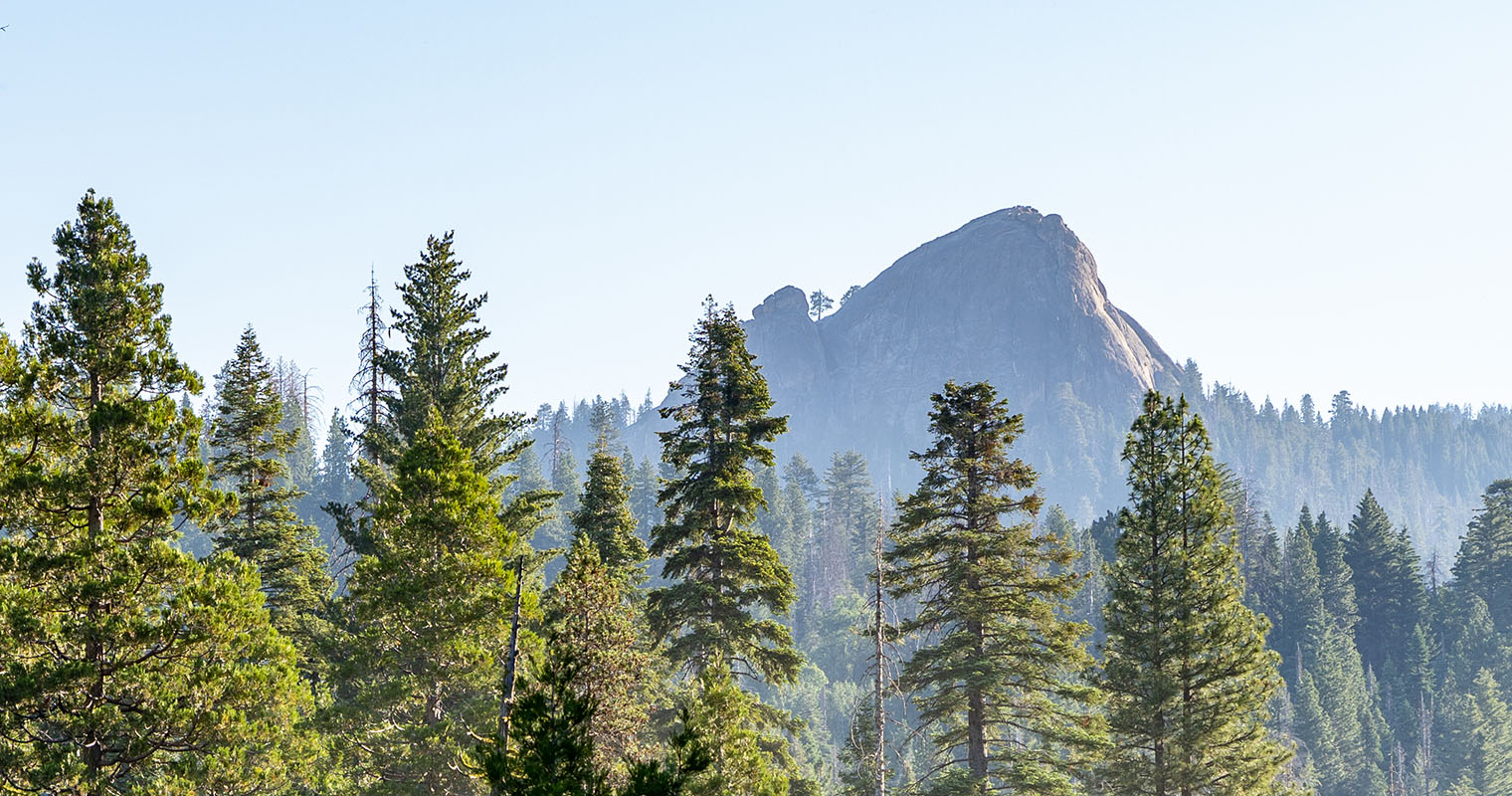 Fresno Dome is a 600′ granite dome located near Oakhurst, California. It has several multi and single pitch climbs on it, including South Pillar, 5.7 YDS, 4 Pitches. I climbed this with my wife Alexa on July 20th 2020.

The drive from Fresno to Fresno Dome took me and Alexa just over 1.5 hours. The road was paved the entire way except the last 4.5 miles. The dirt road was dusty but in good condition and easy to drive by sedans and lower clearance vehicles.

At the end of the drive in there was a very nice sign marking the turn-off for the trailhead. There was one other car with climbers there when we arrived at 7:45am on a Friday. Luckily they were climbing a different route.

The approach to the climb starts on the main Fresno Dome trail. There is an alternative approach that requires hiking from the road below the dome up, but this likely requires bushwhacking and is only recommended early season when the road is too snowy to get all the way to the main trailhead. Once at the trailhead, the trail starts behind a sign and bulletin board.

The trail was pleasant and mostly flat through the forest. Abundant tree moss and patches of wild flowers brightened up the way. After just under half a mile we crossed over an open rocky area and could see the northeast flanks of the dome.

Continuing on the main trail, we reached a low point (saddle) just before the dome. A very nice climbers’ trail headed down through the trees.

We followed the climbers’ trail down and along the base of the dome. We passed by many nice looking walls with really cool rock. The South Pillar route started where a large buttress came down and touched the ground. The route had two bolts visible from the ground and some bushes to the right of the start just uphill. I used a picture of the start from Mountain Project to orient and make sure we were in the right place.

The very start of the climb was the hardest part for me. I started down and slightly left of the first bolt for a 5.9 start. This is the way the route was originally climbed by the first ascensionists. Alexa started up the hill to the right a few steps and traversed in for a start that was closer to 5.7. Warming up on the crux of the climb with a pack on made for a tough start to the climb for me. Things got easier from there thankfully.

After the start, the first pitch climbed towards the right side of the pillar following knobs and short crack sections. I stopped and setup a gear belay on a nice ledge below a section where the climb steepens.

The second pitch continued up the right side of the pillar, passing a large dish with a bolt at the back. The rock on this pitch was a sea of knobs that made for easy climbing and a variety of possible routes. I stayed right when possible, cutting in from the edge of the pillar when necessary to follow the best holds.

The second pitch ended at the top of a semi-detached pillar, where I belayed off one of the large boulders sitting up there.

From the top of the second pitch we got a great view of the third pitch on the super featured and pretty south face of the dome. We did a mini-pitch to move the belay into the notch between the pillar and the main wall. We down climbed into the notch on the climber’s left side of some blocks. The right side looked exciting and possible but more difficult. Alexa found the down climb and the step-across to be the scariest and hardest part of the climb. Thankfully there were a couple gear placements to protect against a fall for the follower.

Pitch 3 started up a decent crack and followed it until it petered out. From there it was choose-your-own-adventure style. I chose to continue up at an angle towards the top-right side of the pillar, slinging knobs as often as desired. The pitch ended below a steep section at a bolted anchor.

The short fourth pitch started out with some steep climbing on amazing knobs and edges. There were a couple small cam placements if desired but I just used slung knobs. After the steep section the angle eased and stayed easy until the anchor. The anchor was two bolts at the top of another semi-detached pillar.

We finished the climb with another mini-pitch. We traversed climber’s left and down climbed past an old rusted 1/4″ button-head bolt and finished by scrambling up 2nd/3rd class boulders until the top.

We took a moment to enjoy the view, packed up, and started the short hike back to the car. The trail from the top of the dome was initially faint but solidified more as we continued down. We arrived at the car and drove straight back to our excited dog in our Fresno apartment.