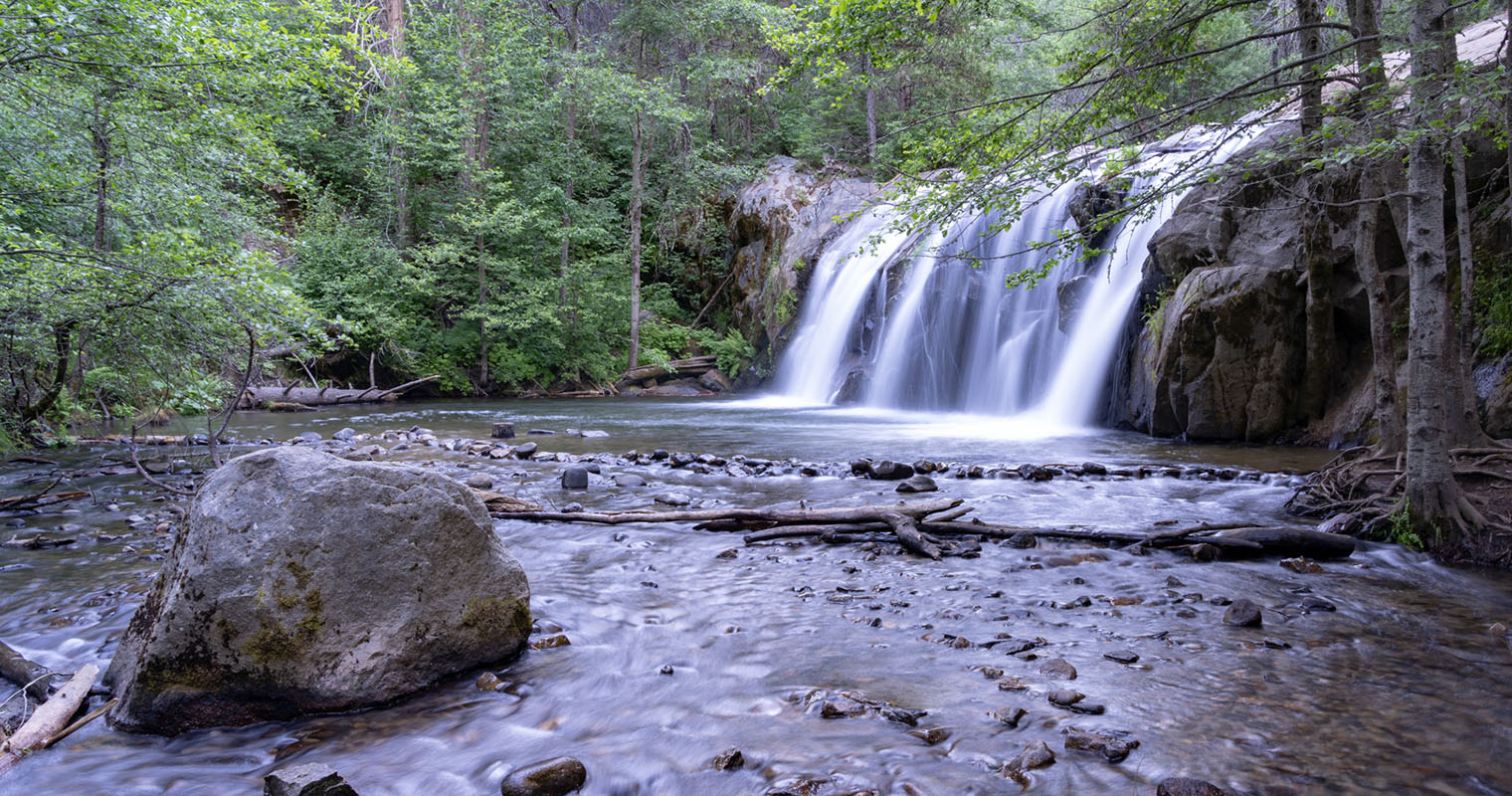 Red Rock and Corlieu Falls are two beautiful and popular waterfalls accessed by hiking 3.9 miles on the Lewis Creek Trail near Oakhurst, California. It makes a nice half-day trip from Fresno, or a quick diversion on the way to Yosemite . Alexa and I hiked this trail after work on June 30th, 2020.

Alexa and I left Fresno at 4:30pm and arrived at the trailhead about an hour later. The trailhead is a large paved pullout on the east side Highway 41. This pullout and the one south of it fill up with cars on the weekends, as this trail is very popular. After work on a Wednesday there were still ~15 cars at the trailhead.

We hiked past the gate and down the wide trail. Shortly we arrived at a well signed split in the trail. Left to Red Rock Falls and right to Corlieu Falls. Red Rock is farther but has less elevation gain/loss. Corlieu is a much shorter hike, but it descends sharply in that short distance. We chose to hike to Red Rock Falls first, figuring that Corlieu would be more crowded.

Soon after turning left towards Red Rock Falls, we reached the creek. I believe there was previously a nice bridge over the creek, but it was no longer. On our hike, there was a very nice log crossing off to the right of where the trail hit the creek.

The trail was well maintained and gently sloped for the most part. We hiked through the forest along the east side of the creek below hills of open forest with bright green vegetation filling between the trees. It was very pleasant.

It was June 30th, summer time, so we were surprised to see a lot of wildflowers along the trail and creek. Especially pretty to see were the Foxglove, Lupine, and Leopard Lilies. Leopard Lilies hang upside-down and don’t provide a landing pad for pollinators. Hummingbirds though can come and hover under the flower, drinking some sweet nectar and brushing up against the pollen covered anthers. We were lucky to see one such hummingbird while we were on the trail. So pretty!

After about 45 minutes of hiking, we made it to Red Rock Falls. Initially the trail lead to the top the water fall. A short path continued to the left through the bushes to the bottom of the falls.

Red Rock Falls was only about 20 feet tall but fairly wide. It poured into a broad and shallow pool that would be a great place to relax, splash, and play on a hot day. We were there in the evening shade though so no water splashing for us. We were lucky to have the waterfall to ourselves at this point though.

Side Note: The creek and the falls change seasonally. Late season (August & September) or in drought years, the falls might be smaller.

We hiked back along the trail the way we came until the initial T-junction. This time we continued towards Corlieu Falls. There were many trails that crisscrossed the steep slopes on the way down to the falls. There was one main trail that was more official looking in most places, but it took some awareness to stick with it.

On the way down to Corlieu Falls, there was a decent view of a section of waterfall that we initially thought was the main falls. We knew there was a wooden viewing platform near the falls so thankfully we kept going and reached the main area of Corlieu Falls.

In this area Lewis Creek drops down a steep valley, which creates Corlieu Falls. Long and narrow compared with Red Rock Falls, Corlieu drops down several stair steps over several hundred feet of river. The falls was more impressive than Red Rock, but the steepness of the terrain made this area less inviting of a place to relax by the river, or at least there were less places to setup shop.

The hike back up from Corlieu Falls to the car took less time than we were expecting, but it definitely got us sweating a bit. By the time we got back, there was only one other car at the trailhead. We hopped in the car and left just as the sun was setting for the day.